The images composing the CIMA dataset are available here. Note that the available landmarks are mostly the result from a single user annotation. This is a work in progress. It would be interesting to have more precise landmarks computed as the fusion of several users’ annotations. Please, consider to contribute to the task!

The landmarks have standard ImageJ structure and coordinate frame. The origin [0, 0] is located in top left corner of the image plane. For handling these landmarks, we provide a simple macro for importing and another one for exporting.

The structure of the landmarks file is as follows:

and it can be simply imported by pandas as DataFrame.

The landmarks files are stored in the same folder as their corresponding images and share the same name.

The landmarks for all the images are generated as consensus over all the available expert annotations:

There is a verification procedure before any new annotation is added to the “authorised” annotation. First, it is checked that you did not swap any landmark or disorder them. This can be simply observed from the main displacement direction of all the landmarks in a particular sequence of images pairs. Second, the error of the new annotation should not be significantly larger than that of a reference annotation.

The annotation is a collection of landmarks placed by several users. The structure is similar to the one used in the dataset with the minor difference that there is user/author “name” and the annotation is made just in a single scale.

Tutorial how to put landmarks in a set of images step by step:

The goal of this additional annotation is to improve the precision of annotation since it is just human manual annotation which can be inaccurate because of used zoom (scale) and each user may recognise the structure a bit shifted.

Example: Assume we have set of three images with used stains HE, CD and ER. Open images with HE and CD stains. Then you load landmarks for HE image and perform annotation on CD image and export only the CD annotation. Then do this pair-annotation repetitively until you have annotated all stains in the set. See the following sample scenarios:

Note - point ordering: The placed points in the additional annotation have to be in the same order as in ten reference image. Also, while placing the landmarks you have to start with the first point and gradually continue until the last point. (placing less point is also an option even preferably you should reuse all points)

Structure of the annotation directory:

Because it is not possible to remove already placed landmarks, check if the partial structure you plan to annotate appears in all images before you place the first landmark in any image:

Exporting finally placed landmarks When you finish to place landmarks on all the images, export each of them into separate files.

There are to scenarios of validation - if you are the first user doing annotation for the particular tissue there is only visual inspection with highlighting larger deformation from estimated affine transform. 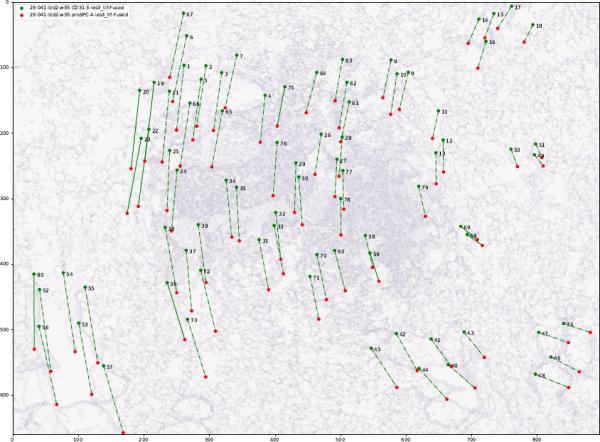 We recommend looking at the warped image pairs (it is generated automatically if you have installed OpenCV) where an affine transformation between two images was estimated from landmarks and the second image with landmarks was warped to the first image. 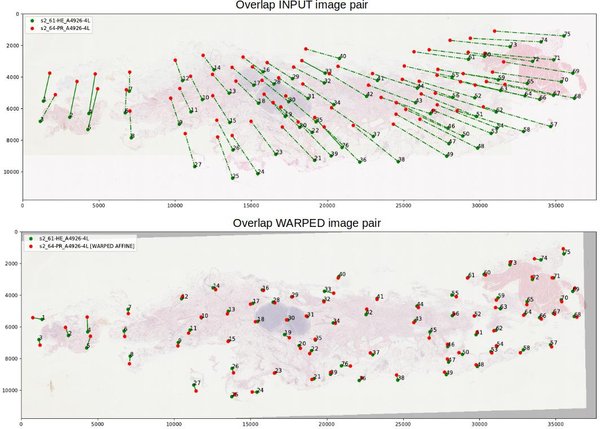 In case you do another annotation for tissue with already existing annotations you should also check your difference to the already existing consensus landmarks makde by other users/experts and are saved in a file. Then, you need to focus on landmarks where the standard deviation or the maximal error value exceed a reasonable value.

If you find such suspicious annotations, perform a visual inspection as described above.